Ahhhh, my fairy chair is finally finished for the second and a half time. I originally painted this chair in '09, and I didn't like it. I wasn't fond of the lavender trellis. Or much of anything, really. I was trying to paint something for someone other that ME.
To make it into something I liked, I decided to paint a fairy sitting in flowers on it. Well, my projects, if they start bad, just get worse. It's like the bad ideas snowball. I chose for my fairy model a woman out of a J. Jill catalog. I ended up with a dark, dangerous looking fairy on a child's chair.
The Bros. Grimm was NOT what I was going for.

The chair sat around for-e-ver. I finally removed the fairy and drew a new, softer fairy on the chair. Then the desire to actually paint it again never came. So it sat. And sat. Until ......

I've been doing so many (failed) experimental transfers of late that it opened my mind to decoupage.
And so, what better time than the present?
Come here little fairy chair ...... 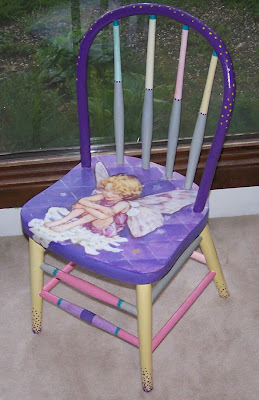 I finally have a finished fairy chair and it's going to etsy later today. And maybe to my booth. It will be so cute in someone's nursery! 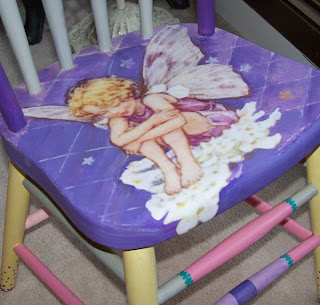 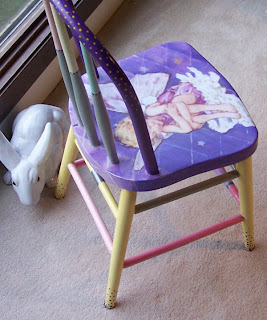 This is the cutest little fairy! 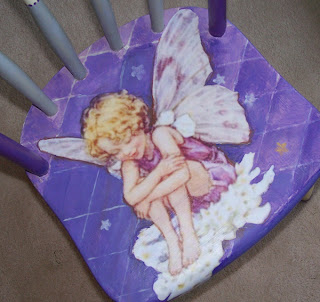 And the lesson I learned is to paint for ME. If I love it, it will show in the work.

Linking to:
crafty scrappy happy
my repurposed life
mod vintage life
between naps on the porch
the gunny sack
project queen
Posted by Daena from Bad Rabbit Vintage at 10:55 AM