If after 7 times you don't succeed,
try another method.

Has anyone else felt woefully inadequate after following a tutorial TO THE LETTER only to fail miserably? Transfers are the thorn in my particular side. I can do an inkjet transfer onto painted wood if it is black only. Transfer onto glass? HAHAHAHAHA snort. I follow the tutorial like my life depends on it but fail every time. I've tried over and over. I really, really want to transfer onto glass.

I also want to do color transfers onto painted wood. I was feeling lucky, I guess, because I gave it a go. On a larger piece of furniture I would hand paint the sign but since this little table is going on etsy I did a transfer to keep the price point down.

Here are some of my attempts. Need I say it wasn't working? I used Mod Podge. I used water. I used Gel Medium. I used Elmers.
'Cranky' pretty much sums it up. 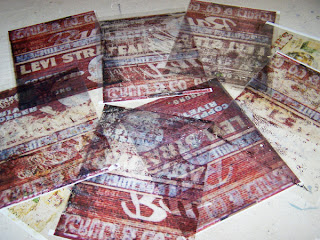 Geez. I threw in the towel and decided to try an iron-on transfer. Nothing else was working, right? To my surprise the iron-on method worked - after 2 tries.

Here's how I did it.

I reversed the image and printed two transfers - the left side and the right side since the image was
16 x 11 or so.

I trimmed the transfers so they butted up together into one continuous image. I positioned the transfers on the table and made little pencil marks to mark
where they went.


Then I sprayed the surface of the table with water and put the left transfer down. (This is the do-or-die step. Too much water makes a mess, too little water does nothing at all. I strongly suggest you do a practice piece to get a feel for how much water to spray.) With the transfer face down on the water I covered it with a towel (I found a towel works best. Pillowcases or other fabric is too thin) and ironed according to the package directions. I waited a minute or so then peeled back the transfer. You can't let it get too cold before you pull it off as it becomes
quite difficult.


The same steps were repeated for the right side of the image. After spraying water I used the pencil marks to get the transfer paper lined up to the first transfer. Covered it with a towel and ironed.


It didn't come out perfect and I didn't want it too. However there were holes that were just too big, so I simply painted the image back in those areas.


The transferred image felt rough so I did 3 or 4 coats of poly until it felt smooth.

And that was it. 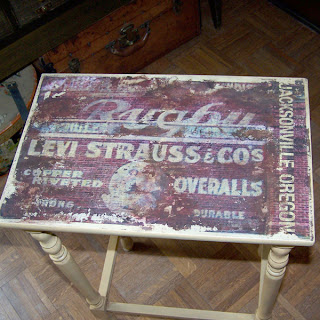 I have a little ghost sign table at last! The image is from a photo I took of a building near where I live. I love ghost signs and hope enough others feel the same way so these historic works of art are preserved. 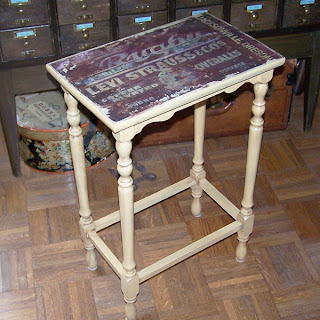 I used Annie Sloan Arles with a glaze made of brown paint and water. I used clear wax over that. 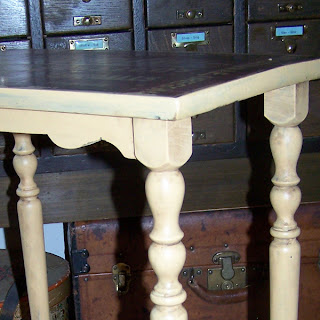 I decided against distressing the table since the glaze and the graphic were rustic enough. 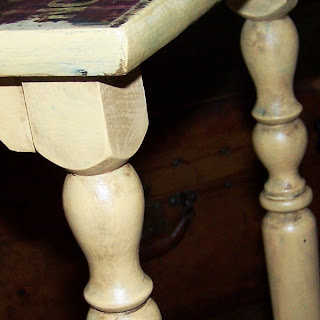 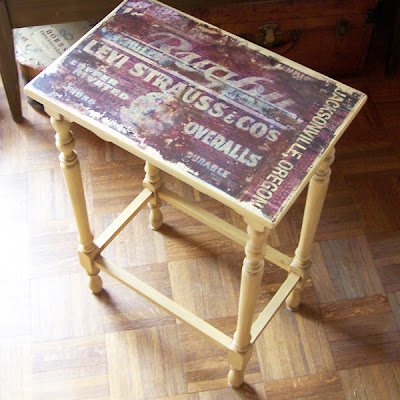 I'm already working on Table #2 and I'm skipping right to the iron-on method.