Once upon a time there was an old table. An unassuming, dried out, wobbly, bent old table.

It followed me home.

I was new to furniture painting and designer paint back then. A babe in the woods. So I painted the table with chalk paint and did the top coat with milk paint..... not knowing .... And Holy Cow! Make it stop! 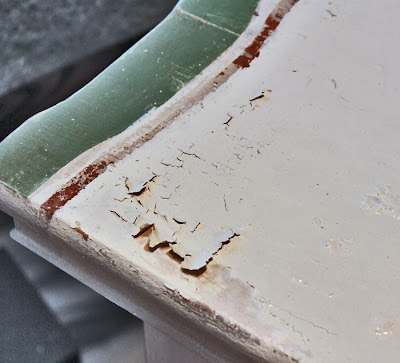 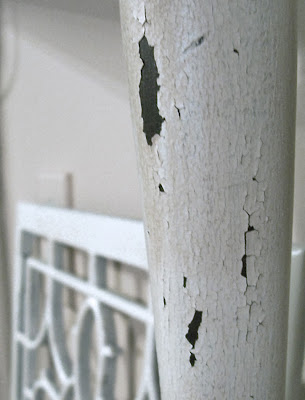 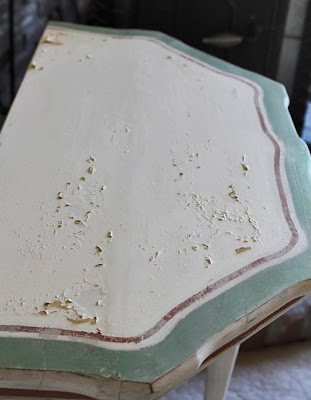 The second time I got just the right amount of chipping and started warming up to it. Plus I'd discovered dark wax and slathered it on. Slathered.

Although I was doing this table for myself I took pictures in case I changed my mind and put it on etsy. So began 4 years of trying to take a decent picture. It's leggy and scrawny. It's nothing but spindles with a flat spot on top. The thing is all about negative space! And I didn't have but one cheap camera. Change lenses? HA HAha ha ha. snort


In the beginning there was a peach table. It sat in front of a peach wall. And it was awful. 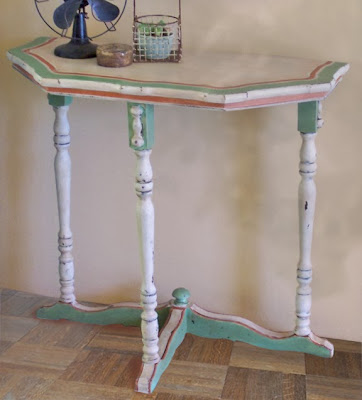 Here it is slammed up against the wall on a fake floor. 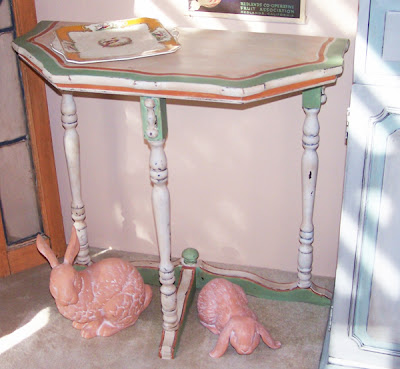 And in natural light, several months later. Still tall and gangly. And peach. 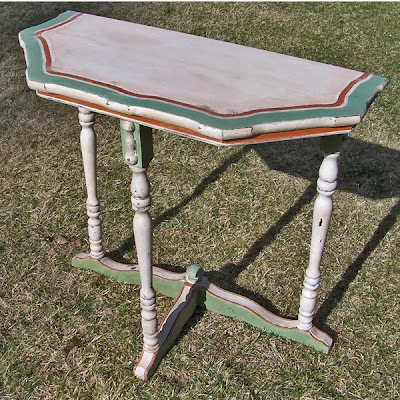 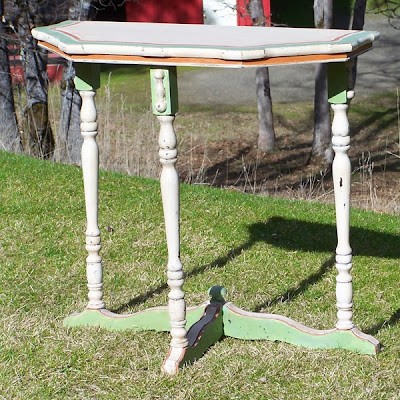 I dragged it outside. 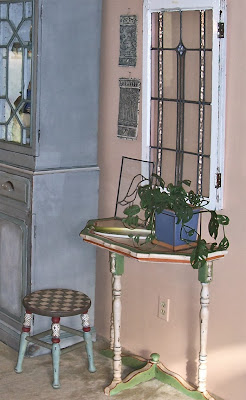 I dragged it back inside. (Disclaimer: The walls aren't that peachy, however I WILL repaint) 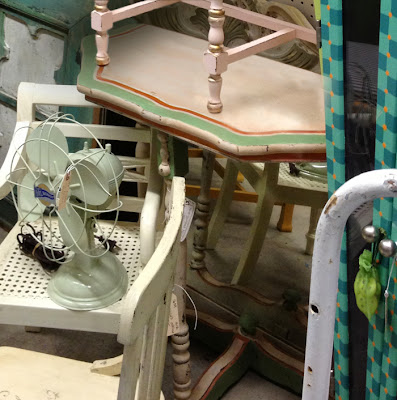 I buried put it in my booth. 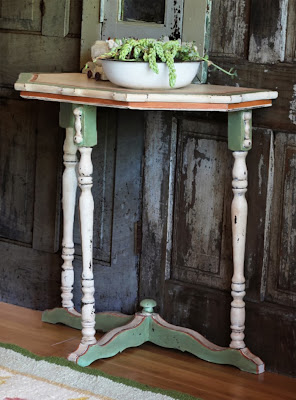 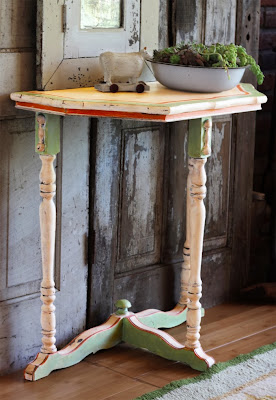 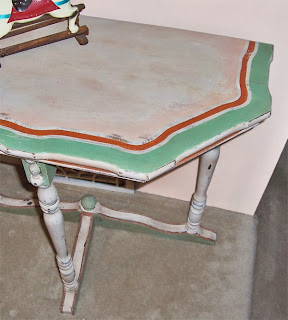 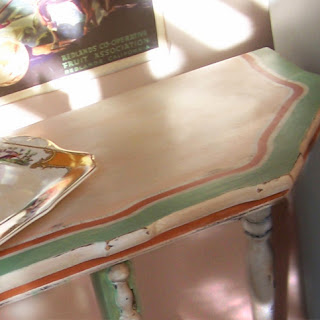 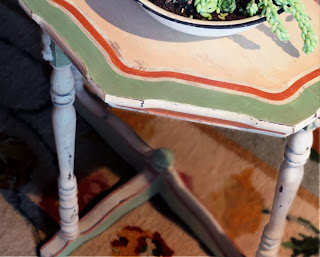 A dark room might help...... but I finally decided on a redo.

You can't tell from the pictures but there was so much dark wax on the table that it looked dirty. And I never liked the peach table top. No, really! I DIDN'T! When I decided to sell it I gave it an update. 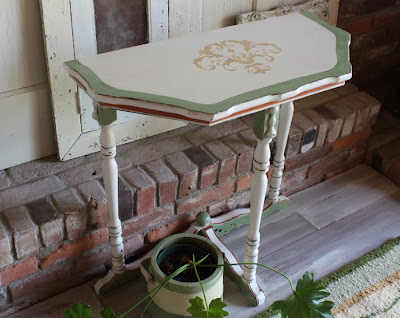 In with the Old White, out with the peach. But not before I went over the whole thing with odorless mineral spirits to remove the wax. 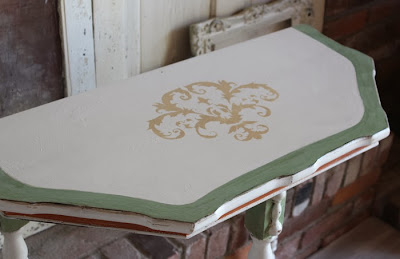 The pumpkin border is gone from the top, as is the peach! YAY! Let's hear it for beautiful whites! 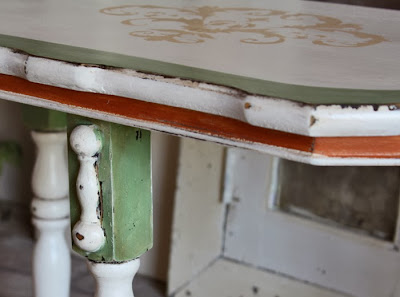 There was a world of difference with the dark wax gone. Don't misunderstand me, I love dark wax, but when I was a newbie I had no idea when enough was enough. 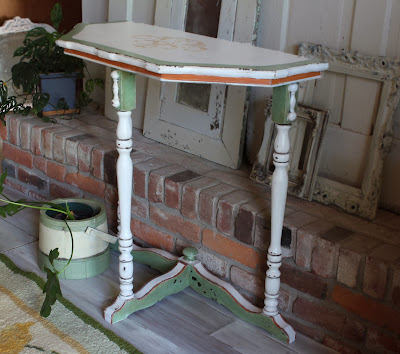 The table is brighter and more cheerful looking now. 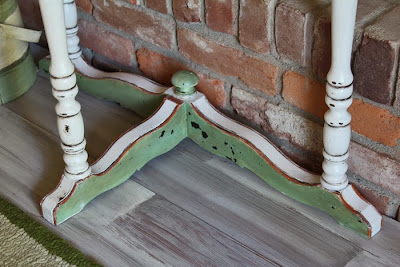 The green remained the same. 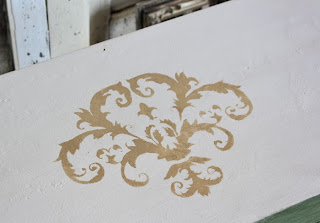 The finishing touch was the stencil painted in a chamois color that I mixed myself. 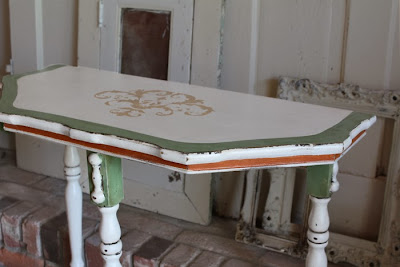 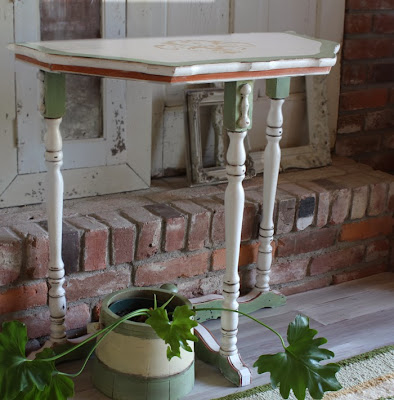 It's still a gangly table but the backgrounds are getting more interesting.

It's going back to the booth today but I really want to keep it. Unfortunately I'd have to hang it from the ceiling or something; there is simply no room.

Posted by Daena from Bad Rabbit Vintage at 1:20 PM