I don't know why I feel compelled to write a post about not giving up. Or maybe I do know why. I had the idea to write an encouraging post to all the new crafters out there who are just starting to try the techniques bloggers have been writing about for some time.

On the surface that's what this post is about. Underneath there are many possibilities. We all have something we struggle with and the idea of not giving up is just as relevant to life's challenges as it is to the crafty projects I'm going to show you here. More so, actually. But let's start with my personal pet-peeves.

Aging a mirror with cracks.
I make acid mirrors all the time. I'm familiar with how the acid works on the silvering so I thought I could do this. The difference in the techniques is basically, when I do an acid mirror I want big blotches of missing silver because I will be gluing fabric behind the mirror. For this project I wanted nice cracks and overlapping silver.

I have followed this tutorial to the T. I swear! The part where she says the silver can be pushed around for a cracked effect is where I'm falling off the boat. I want to push the silver around! That is exactly what I want. Can I do it? Nope. 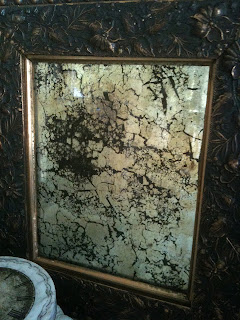 See all those pretty cracks? (original) 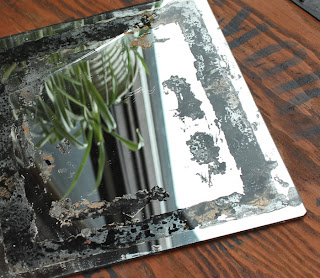 See the black areas where I wanted a cracked border around my mirror? For me, the silver just dissolved. There was nothing to push around. Nada. 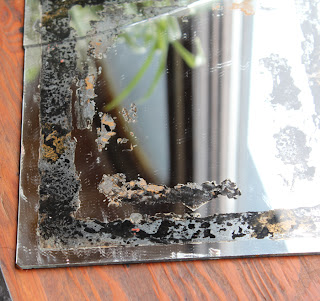 So I dabbed black paint and tried to repair the damage using Crylon's Mirror Finish spray paint. It might have worked if my borders had remained taped but the acid seeped under the tape. Then the mirror broke and I went back inside and kicked something.

I just want the silver to not melt so I can manipulate it. Okay? geez.

And that leads to the next horror - I mean, project..

Inkjet transfer onto glass or mirror.
I am a handy person. I have a skill set. I can read. I will occasionally follow directions. Yet, I have never, NEVER had success transferring onto glass. And, oh how I've tried. I've wasted way too many transparencies trying to conquer this. And yes, I become very, very cross. Bad language has erupted from my mouth. I know! Who needs that grief?

This is another tutorial that I followed to the T. Repeatedly. And then a few more times. 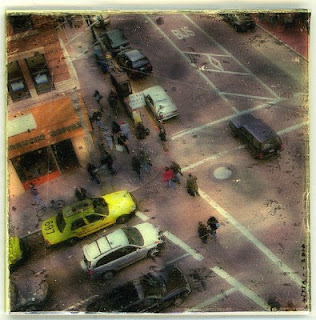 It's such a cool effect! And how hard could it be? I transfer onto fabric and wood all the time.
(original) 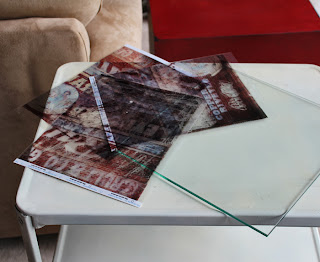 I ended up with gooey ModPodge glass and a pile of wasted transfers. Not a spec of color has transferred for me. I never get a glimmer of hope. It's been a while, so maybe it's time to tackle this project again.
Like I said - don't give up!

Staining glass with food coloring.
Maybe this one was my fault. I should have started with something easy instead of going straight to challenging pitchers. Except I wanted tinted pitchers, not tinted mason jars. 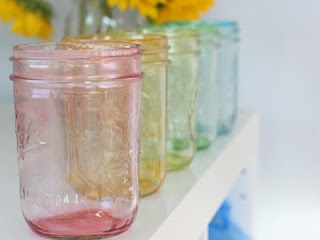 They are so pretty! (original) 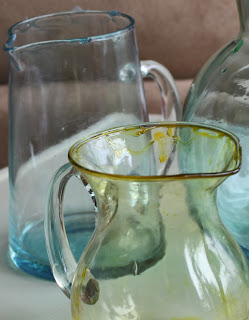 And here we have "less pretty." See all the blobs and stains? Those shouldn't be there. 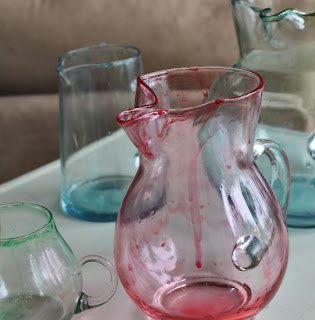 Oh this poor pink pitcher! According to the tutorial some blobs and staining are to be expected and an extra 10 minutes or so in the oven will make them disappear. My pitchers were in the oven for FIVE HOURS, people. Five hours. And I got food coloring on the floor. And on the butcher block. I don't know how it happened. I don't remember splashing.

Give up? Nope. I'm going to try mason jars.

Silvering bottles.
I love mercury glass, old mirrors and tarnish on silver. When I saw this short tutorial I was way excited. 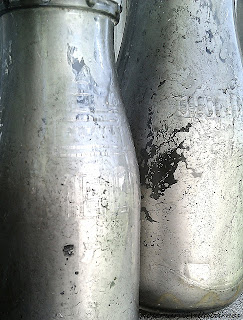 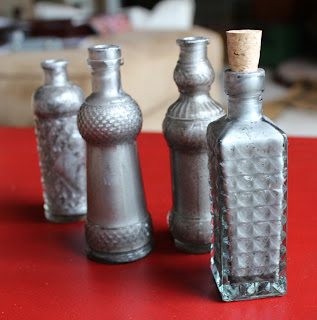 Look! No cracking! Color me surprised!
This was the most interesting technique. Dirt and rust are added to the liquid silver. Dirt and rust. I had to try it! The ratio of dirt and rust must be the key. I ended up with flat silver bottles. Too much dirt? Skimpy on the rust? huh

I'll try again. I have no shortage of dirt or rust.

Then there are the projects that
Just go wrong on their own.

You can't let little setbacks stop you from going on to even greater setbacks. That's how you grow.

Take this mess for instance: 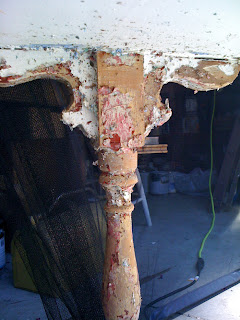 It was a latex stripping nightmare! I had gooey rubber hanging in chunks all over this little table. But had I not pressed on and learned, I would never have known the true horror of painting over freshly stripped mahogany. 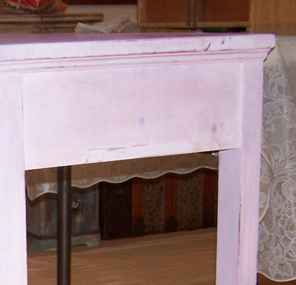 Mahogany bleeds through most everything except the toughest primers. I layered coat after coat of paint before I went and asked Google what the heck was going on. 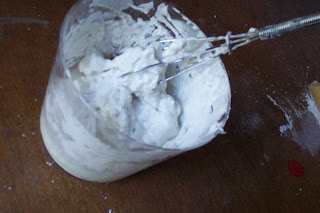 How 'bout when i winged it making chalk paint from complete scratch, using nothing but chalk, glue and water? I ended up with something like bread dough. I threw everything away.

And on and on. We all make mistakes and when you are trying something new, well, they are bound to happen. Just try again later. That's what I have to do. I have yet to conquer the projects above. But I will.