What I Did On My Summer Vacation

Every now and then a project comes along that forces me to learn new things. I had such a project this summer. I started it in early August and am not quite finished with it yet. 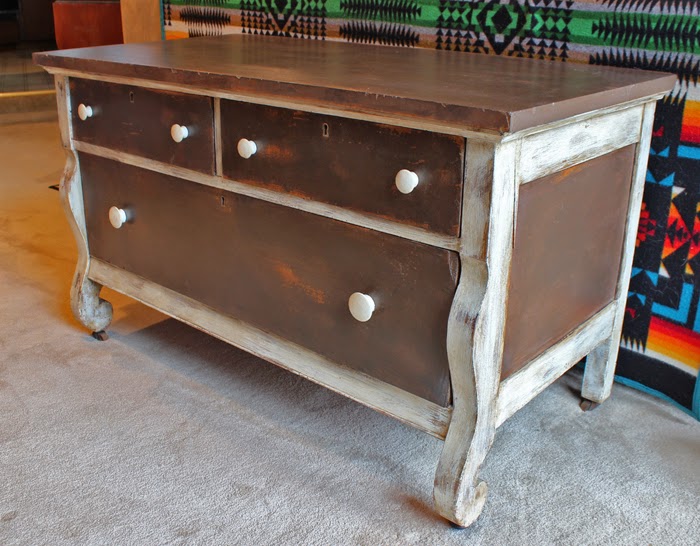 A few years ago I did this lowboy for myself. I also used it to teach myself how to layer paint. 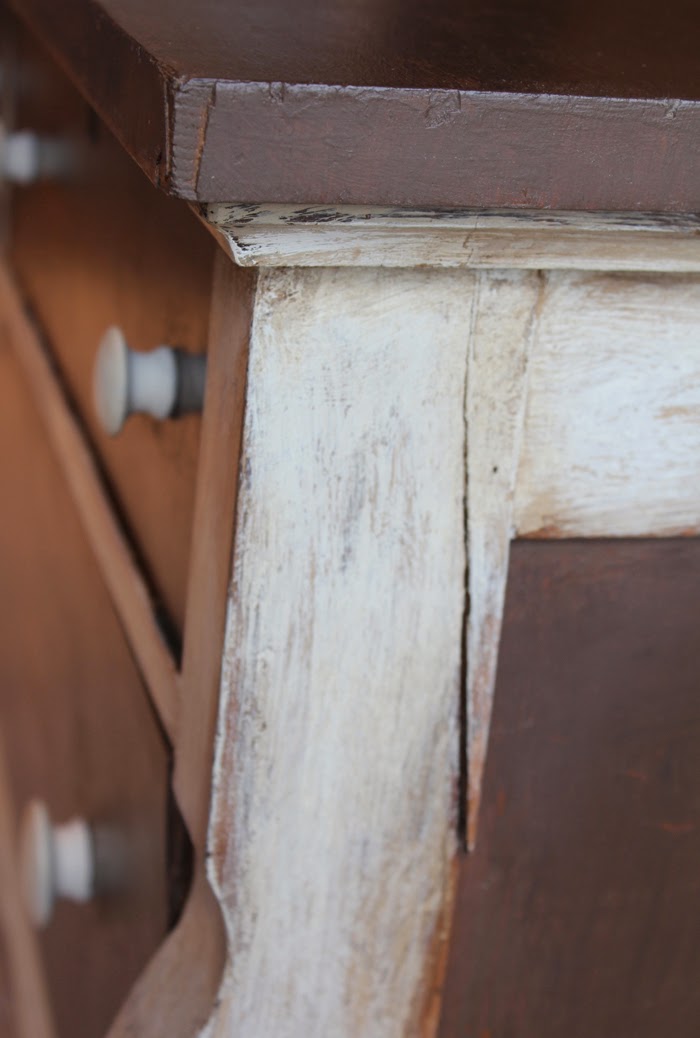 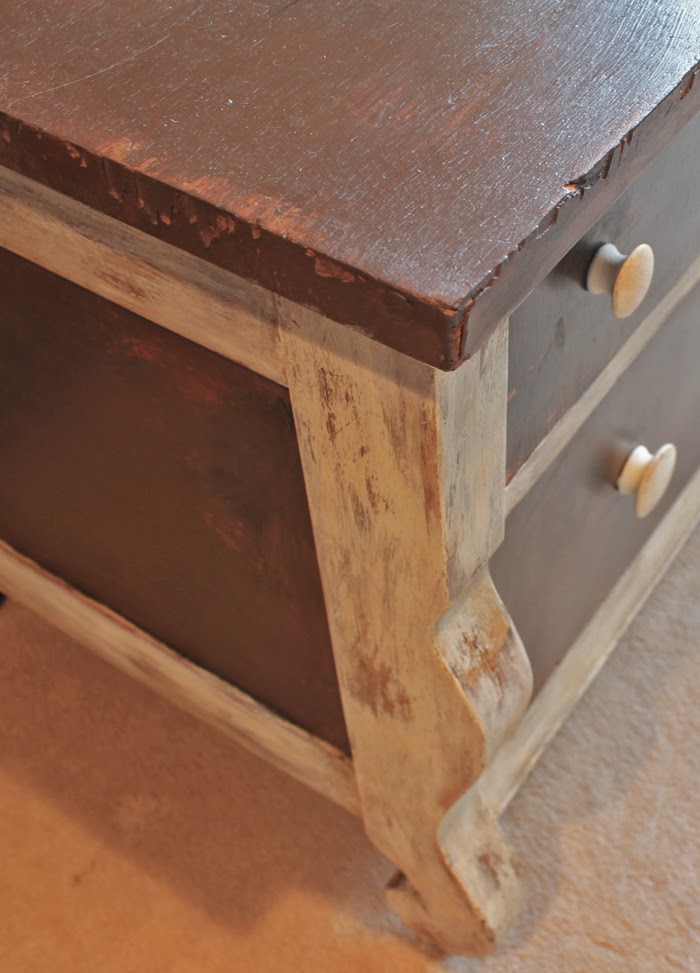 Since it was for me, I overlooked some repairs such as the split in the top picture and the veneer issues above.

Then new furniture came and there was no room for the lowboy. It went to the barn for a good long time. Then I decided to sell it and thinking no one wanted blah brown, I'd paint it red.

And since this was a simple repaint, I didn't take pictures. I kick myself now because this lowboy refused to be repainted. No matter what I did, the paint went on faded and blotchy. I re-did it I don't know how many times.  I used up all my red paint and still had pale blotch results. Then success, sorta. The paint darkened with wax. Looking back, it was too hot to be painting. I think my paint was drying before it even hit wood. 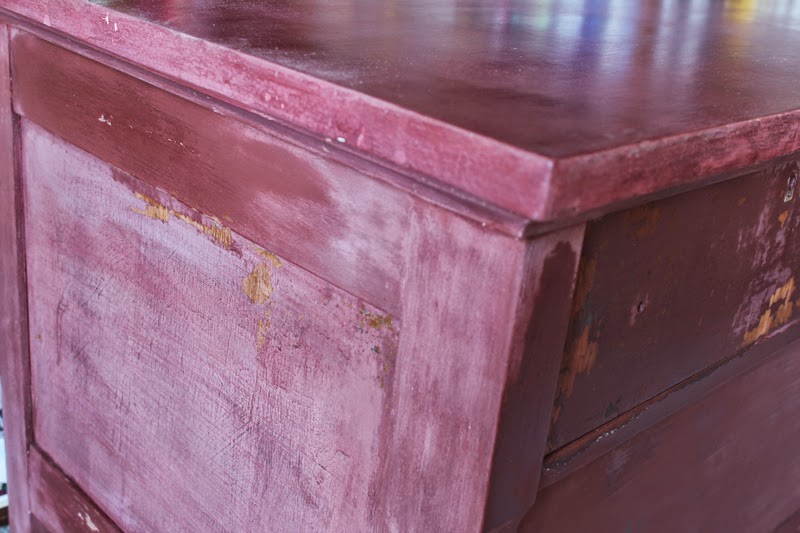 I left the low boy in the garage while I attended other things and when I came back to it all the wax had clouded.  I started buffing but it was too hard. I took mineral spirits to it and removed wax then let it rest and dry. (It seems the garage got too hot and the wax melted.) 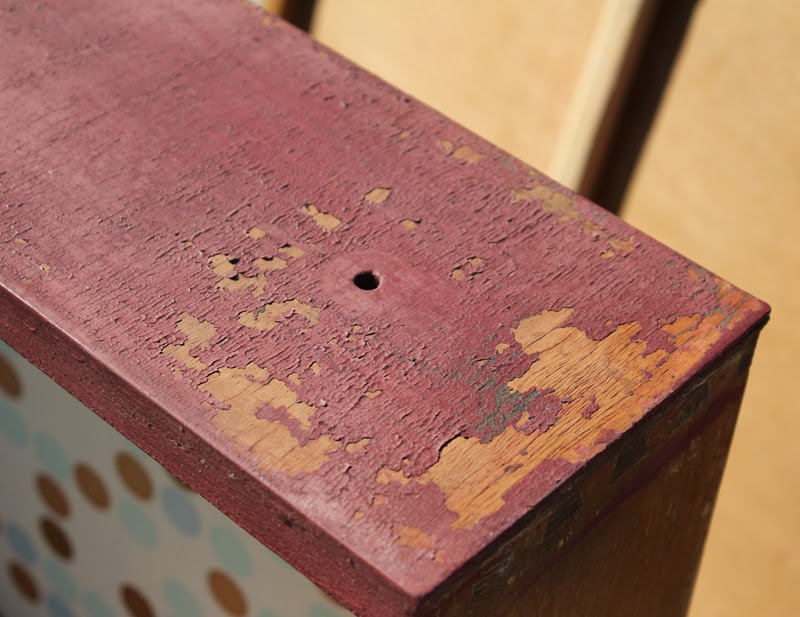 ,I came back to this. I sanded it lightly because I wanted the chippy look, but ALL the paint came off. The same with the rest of the lowboy. It was like the paint couldn't wait to get off of there. 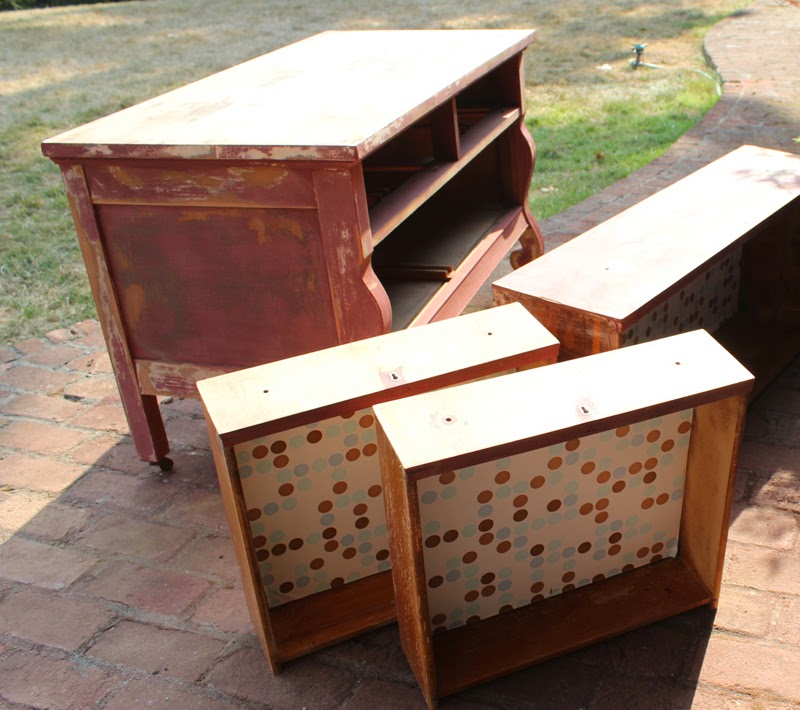 So I sanded and repainted the whole damn thing. In the house. With air conditioning. 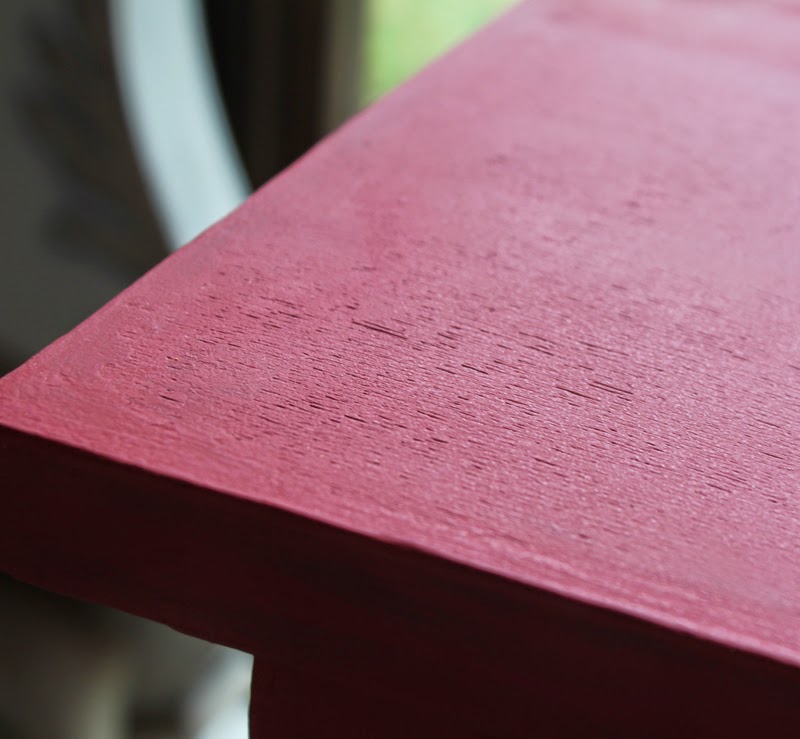 The top dried like this. I don't know if the paint stretched or what. 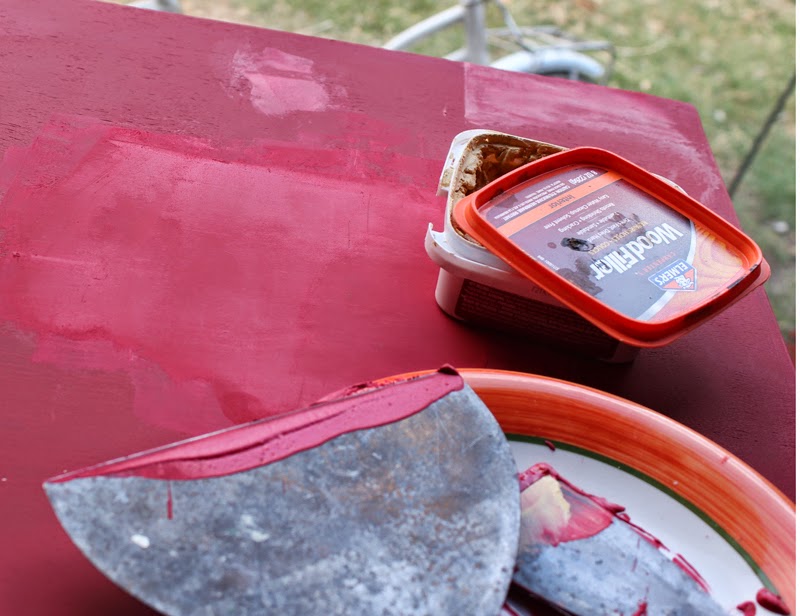 Part of me just didn't want to deal with it. The other part said 'Let's experiment.' So I mixed paint and wood filler and scraped it over the whole top of the lowboy. It worked! 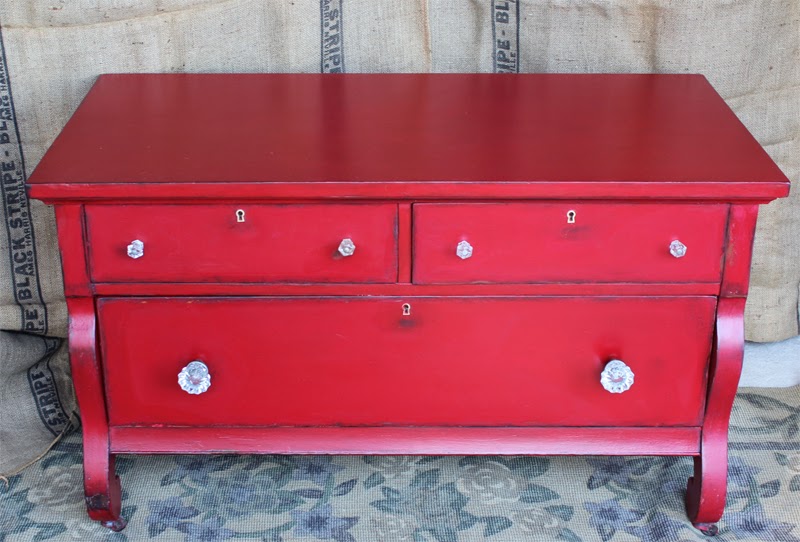 The top is smooth and shiny. 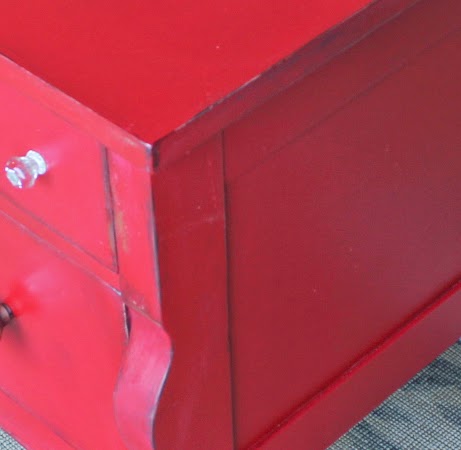 I fixed the split wood. 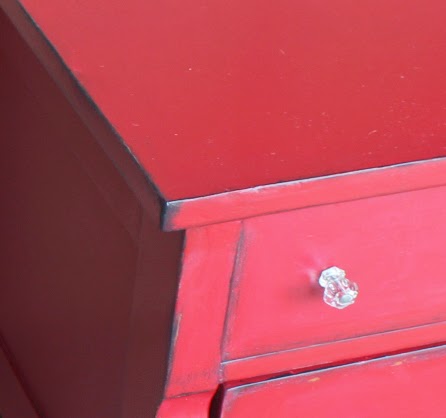 And I fixed the veneer. 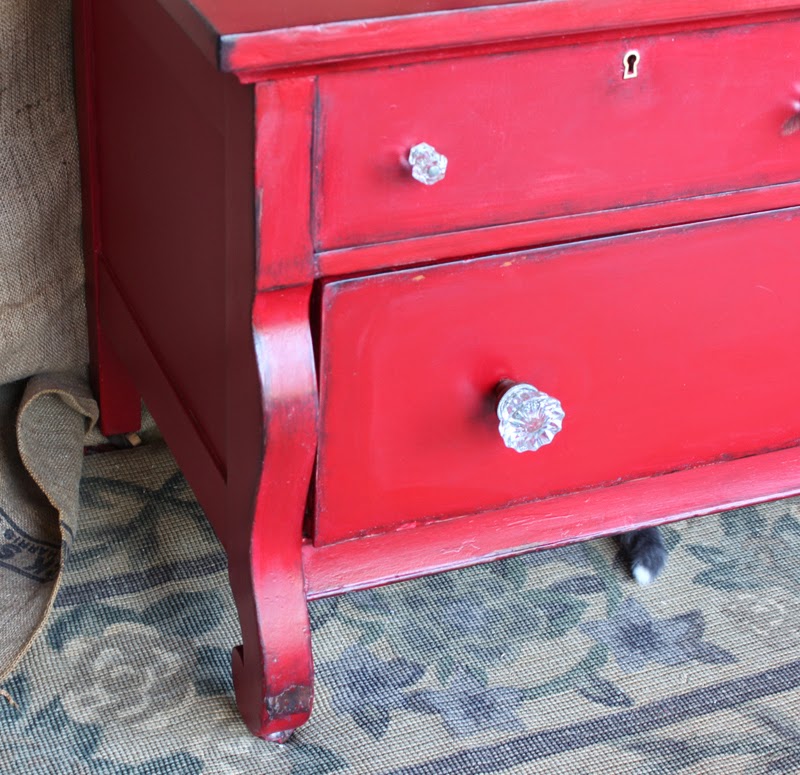 Inspector 22 is checking the underside.
Instead of the traditional wood pulls that seem to be on all empire pieces I used vintage clear glass knobs. 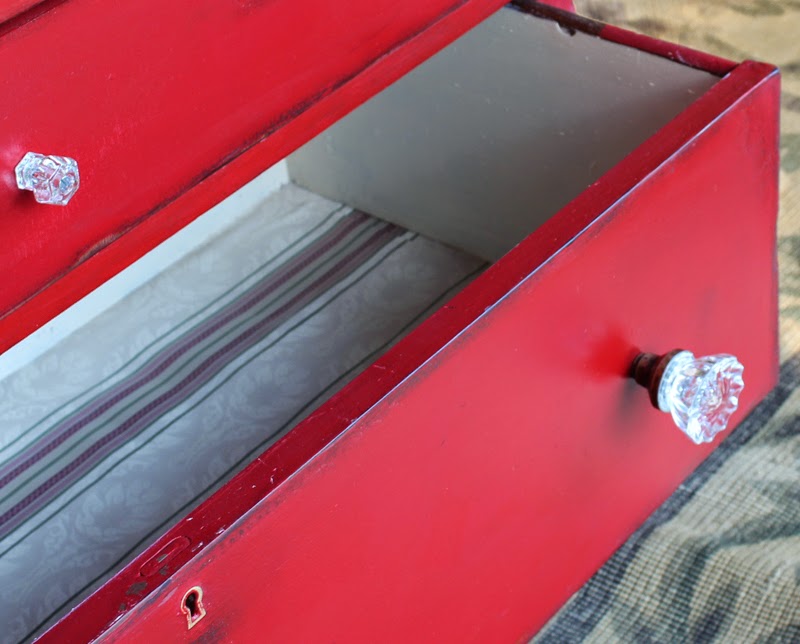 I painted the inside of the drawers and laid new paper. 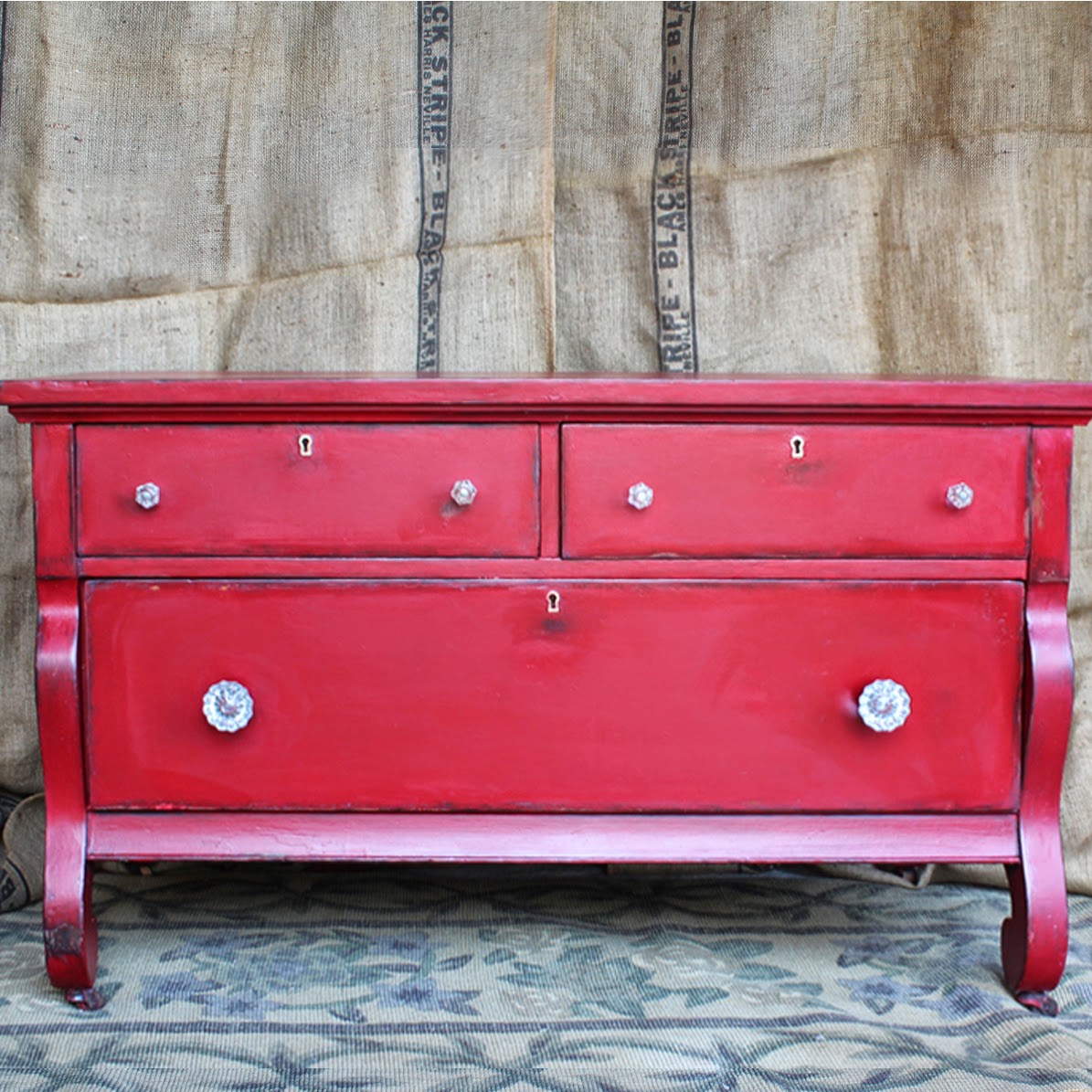 The finished lowboy. It will be at the Collector's Market soon.

Linking to:
by stephanielynn
my 1929 charmer
nifty thrifty things
the dedicated house
elizabeth and co
Posted by Daena from Bad Rabbit Vintage at 5:19 PM