I have been so busy painting large pieces that I sorta neglected my etsy store. YIKES! Gotta get some shipping-size pieces done! It's hard finding nice little tables but I found two after looking at a seemingly endless stream of press-board stuff.

(Then Mr. Bad Rabbit surprised me with 3 awesome little tables when he returned from a meeting in Portland on Wednesday. I'll get 'before' pictures. Those little guys are cute! Mr. Bad did good!)

The local Re-Store had Milk Paint last week, so I grabbed some. It was the paint in a can, not the powder you mix yourself. I've used the powder and after the learning curve I've had success with it. To my surprise the paint in a can was like latex. Maybe it IS latex. I haven't bothered to read the label yet.

Anyway, one of the colors I bought is Federal Blue and I wanted to try it. So I grabbed a little table and the weirdest thing happened! It didn't become a Union Jack! I just did a simple blue table with a white star. Twice. Because painter's tape pulled the blue up in rubbery strips. Well, heck. (That's not what I really said.) It took some trickery but I got that star on there.

(I am looking forward to Miss Mustard Seed's Milk Paint.) 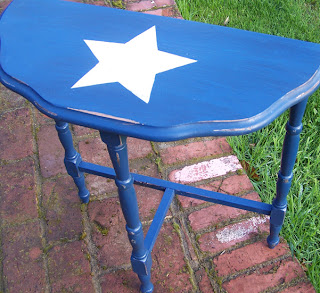 I thought "hmmmmm, folk art" and grabbed a second table. I've not done Americana before so, what the heck? I was more cautious with the painter's tape this time and only had minor repairs when the paint pulled off. 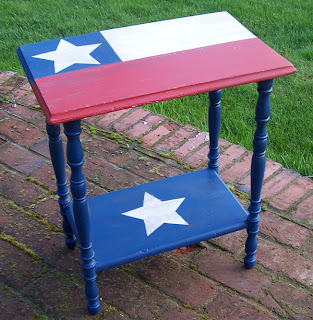 Groups of three are best but I had no other tables so I went with my test stool. This little guy is what I test a technique or color combo on. Guess I'll have to go back to using plywood. But yay, the stool is mostly chalk paint. :-) 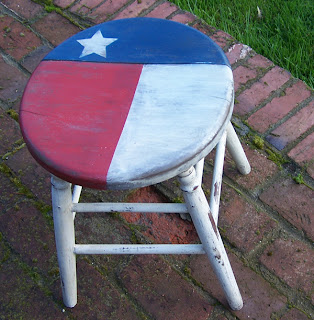 So I have my little group of Americana to go on etsy - as soon as I figure out freight charges. I soooo don't enjoy figuring out freight. Sometimes I think I'd rather chew rocks. 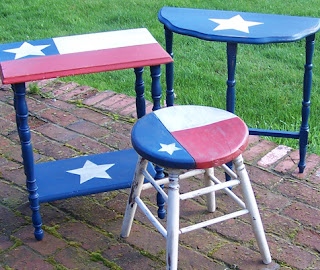 Next I'm doing a Union Jack.

Have a great weekend!


UPDATE: Today I went to fluff my booth and all 3 Americana pieces were sold! Huh. They didn't last the weekend.