The buffet that ate my house

First of all, let me say I'm embarrassed by the awful pictures. This buffet is so huge i had to paint it in the livingroom, smashed between the bookshelf and the couch. We had snow so painting it in the freezing cold garage was out of the question.

There is no natural light behind the couch. And there is no room to take decent pictures. I tried standing on the couch but I wobbled too much, plus I was afraid of falling to my death.

This is my first gigantic piece of furniture and it taught me a lot. The most important lesson (after, like 5 coats) was to use WIPE ON poly. Hours could have been saved. Hours!

Here is the Beast before: 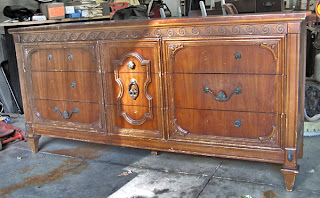 A dog tried to eat it. 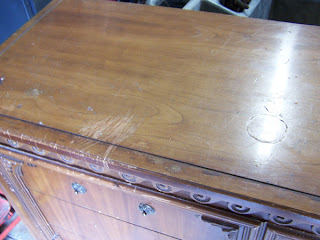 Six-inch pulls meant I had to use wood filler in the holes and drill new ones. Actually, Mr. Bad did the drilling. He gets all kinds of freaked out when I use power tools while he's away. 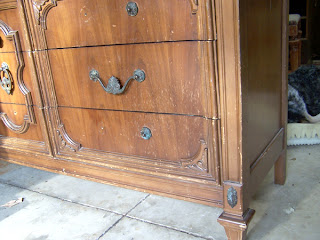 Want to see the half-a-dead-mouse my cat left for me while I worked? No? Okay. How 'bout the 2 birds? Gopher?
My cat must have thought I needed rewarded for
working so hard.

The finished buffet, along with Morgan, Battle Cat. 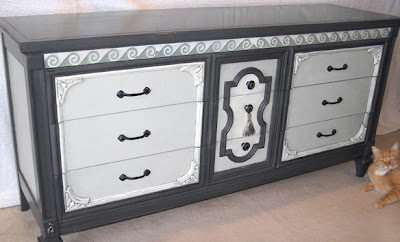 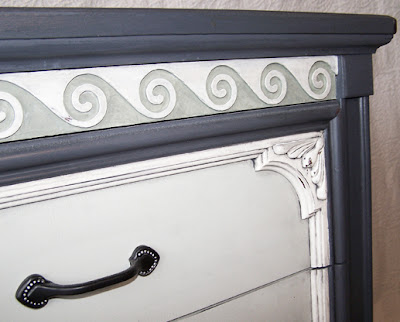 I did very, very light distressing and glazing. 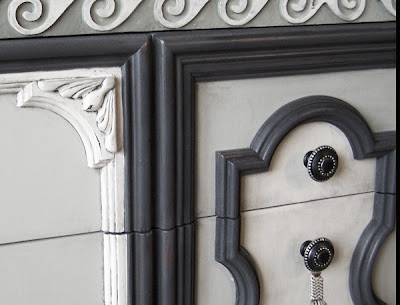 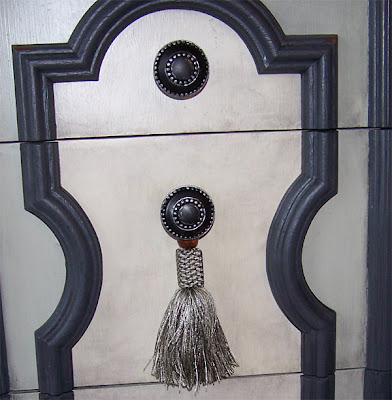 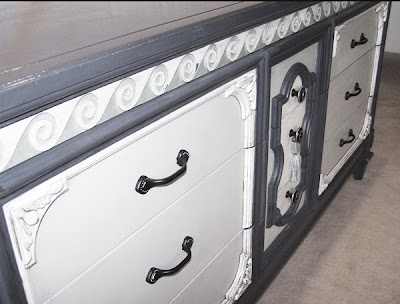 Whew, finally finished. I was on a deadline with this one. I thought I had all the time in the world - a week and a half before my new booth opened. Then Real Life struck. Mr. Bad Rabbit was stuck in Portland due to snow so I was without heavy-lifting muscle. Then, surprise, I had to go to town every day for transfusions and those wonderful Shots-In-The-Belly. That was an entire 5 days KILLED. Plus we went to the Vegas Gift Show, eating up another 5 days. So the pressure was on! Maybe my cat sensed the stress level and brought me the dead stuff as encouragement.

While I waited for paint to dry, I busied myself cleaning blood off the carpet. Not exactly soothing. 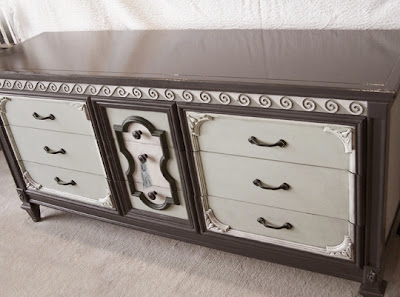 This buffet cost me $35 at a local thrift store. I was beyond thrilled! I'm normally the person who arrives just in time to see the really good stuff being pushed out the door by someone else.

Linking to:
my 1929 charmer
under the table and dreaming
the gunny sack
between naps on the porch
miss mustard seed
home stories a to z
tip junkie
domestically-speaking
crafty scrappy happy
diy show off
kammys korner
coastal charm
Posted by Daena from Bad Rabbit Vintage at 11:39 AM