There was an Estate Sale ad on Craigslist that offered furniture for shabby-chic-style painting. I don't really consider myself a shabby chic'er but furniture is furniture and I set off to look at the sale.

It was some 76 miles round-trip on country roads. Took forever. And when I got there, I saw stuff strewn everywhere. And all that stuff had more stuff piled on top. There was one unfortunate woman trying to organize the piles. She worked for the bank, she said. And she went on to explain about the 30 cats and the deceased being a hoarder and please don't mind the smell.

Wait. What? Don't mind the smell? 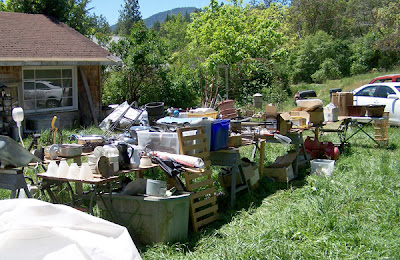 There were 4 buildings plus the yard piled with ... stuff. Most of it used be be quite valuable but ended up tossed outdoors, I assume to make more room for cats.

There were so many unusual and exotic pieces of furniture just left in ruin. Most of it was in two barns covered in dirt, so I didn't bother taking pictures, but in hindsight .... There were HUGE pieces of mission furniture like I'd never seen before. Covered in dirt. Even if I'd just taken pictures of the hardware! sigh. But I had no gloves and well, EWWWWW ....  'Nuff said. I had no gloves. 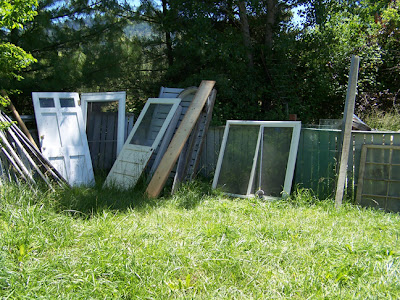 There were two houses that smelt of cat urine so badly I could only glance around, zooming from one room to another holding my breath. One house had a room of lamps, a room of light fixtures and a room of ruined art. Fabulous art that had been used first as a litter box then as a feast for mice. It was heartbreaking.

In the second house, again, there were ruined treasures everywhere. In the kitchen were hundreds of signed Japanese pottery pieces that had been found outside buried in mud.

I would have taken so many more pictures, but the smell! I'd never been anywhere near a true hoarder's house before. Between the cat urine smell and the rat and mouse droppings I had a severe case of the heebie jeebies. 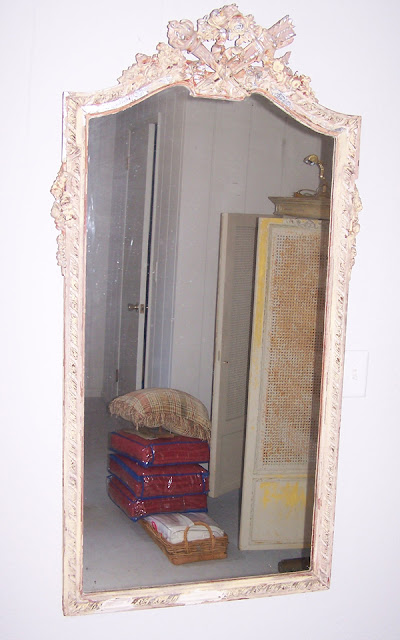 I actually was tempted by this mirror. 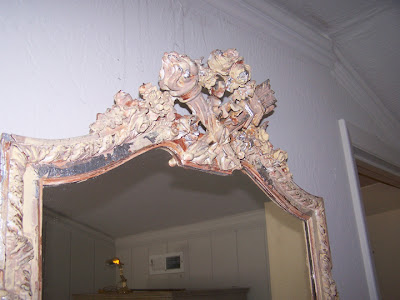 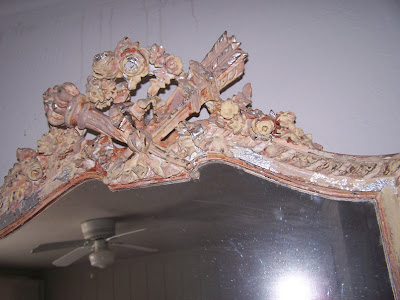 It appeared to be made of sugar and frosting. 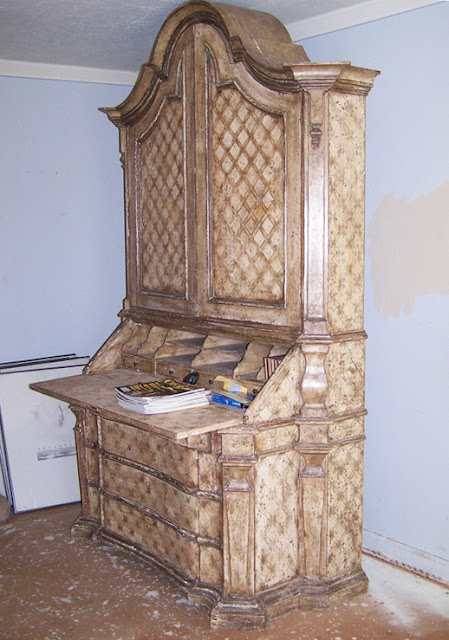 Eight feet of ... of ... desk? It filled the room. No, it ATE the room. If I had anywhere to put it I would have made it mine. It was only $150! Eight feet of odd goodness and I just couldn't think of what I would do with it. Not to even mention getting it home. 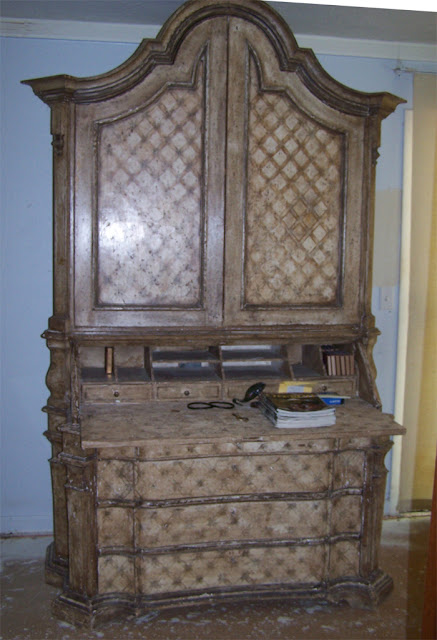 The pictures don't show the scale of this thing. We were trying to figure out what it was. The former owners were producers in Hollywood so we thought it might be a prop. 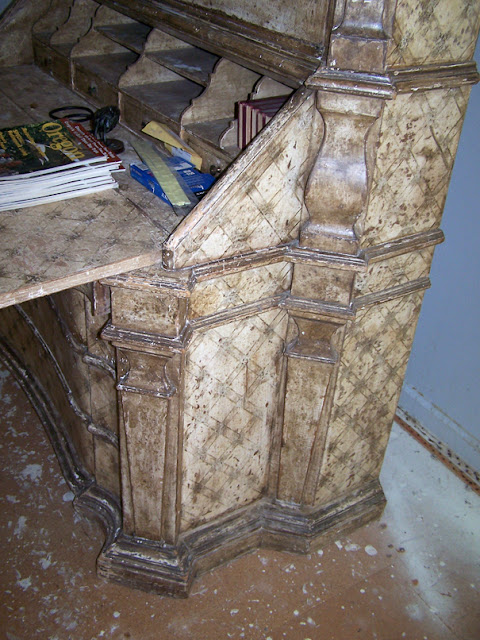 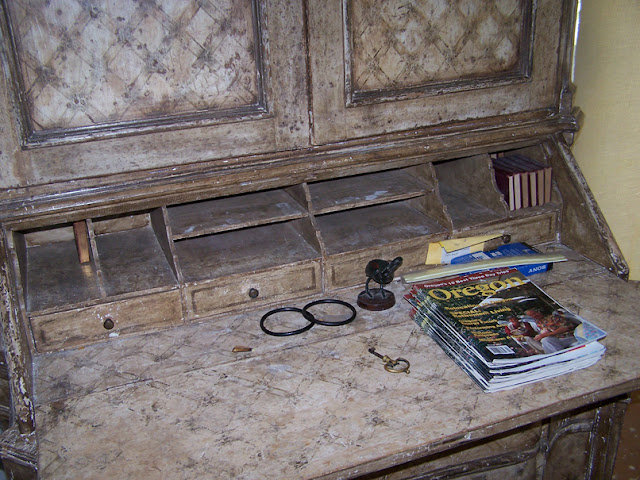 I wish I had opened the drawers and cabinet, but these pictures were taken in 4 or 5 dashes into the house after gulping fresh air. I couldn't hold my breath long enough to snoop. 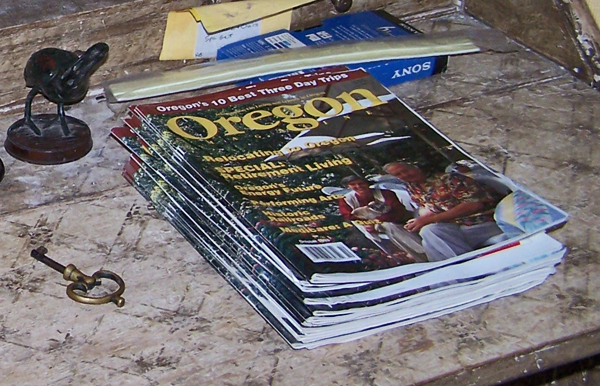 I couldn't believe they still had the key to this thing. The magazines feature the owners. Recognize them? Me either. 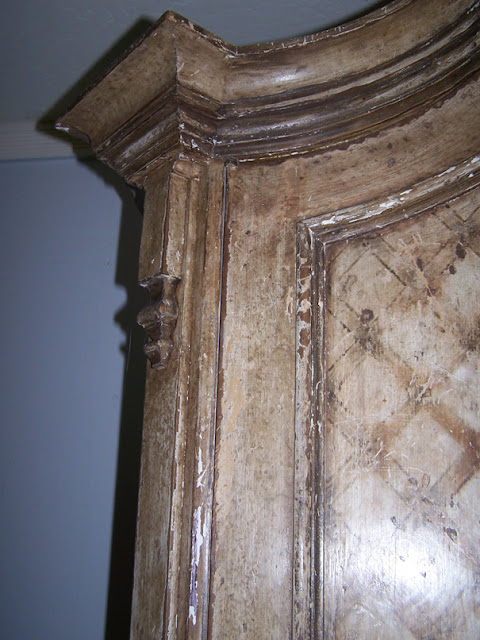 This awesome patina isn't paint. It seemed to be a paper covering of some kind. I'm not sure what it was.

Hindsight being all they say it is, I really wish I would have figured out a way to get that desk home. It was actually in pretty good shape, considering. I think the only thing that saved it from being shoved outside to make room for more cats was its sheer size.

Posted by Daena from Bad Rabbit Vintage at 4:45 PM