I just don't like honey oak 80s furniture. Never have. Why do did I own a honey oak bedroom set? When we moved from Seattle to a new-build home near Portland we were faced with a big empty house. We went on a whirlwind furniture shopping spree and well, there you have it. Rushed decisions. All of what we purchased that week is gone now, except two dressers.

I've been wanting to move those dressers on to their next life for years but Mr. Bad Rabbit has wanted no part of that plan. How 'bout paint the dressers? Nope. He had two requests, leave his dresser alone and don't block the big windows in the living room.

So imagine my surprise when he said 'I might want that dresser' when I was almost finished painting the huge yellow and maroon thing I'd dragged home last summer. I've mentioned this dresser in a previous post. It was The Dresser Left Behind. The craigslist seller had told me it was the only thing left in a foreclosed house. No Kidding?

I was transforming it into a satin black, stately beauty. 'Stately' because I think this is the biggest dresser I've ever seen. Asked why the change of heart? Mr. Bad said this was the first masculine dresser I've painted. Well, I beg to differ and I could show pictures but whatever his reasons, I'm liking it! 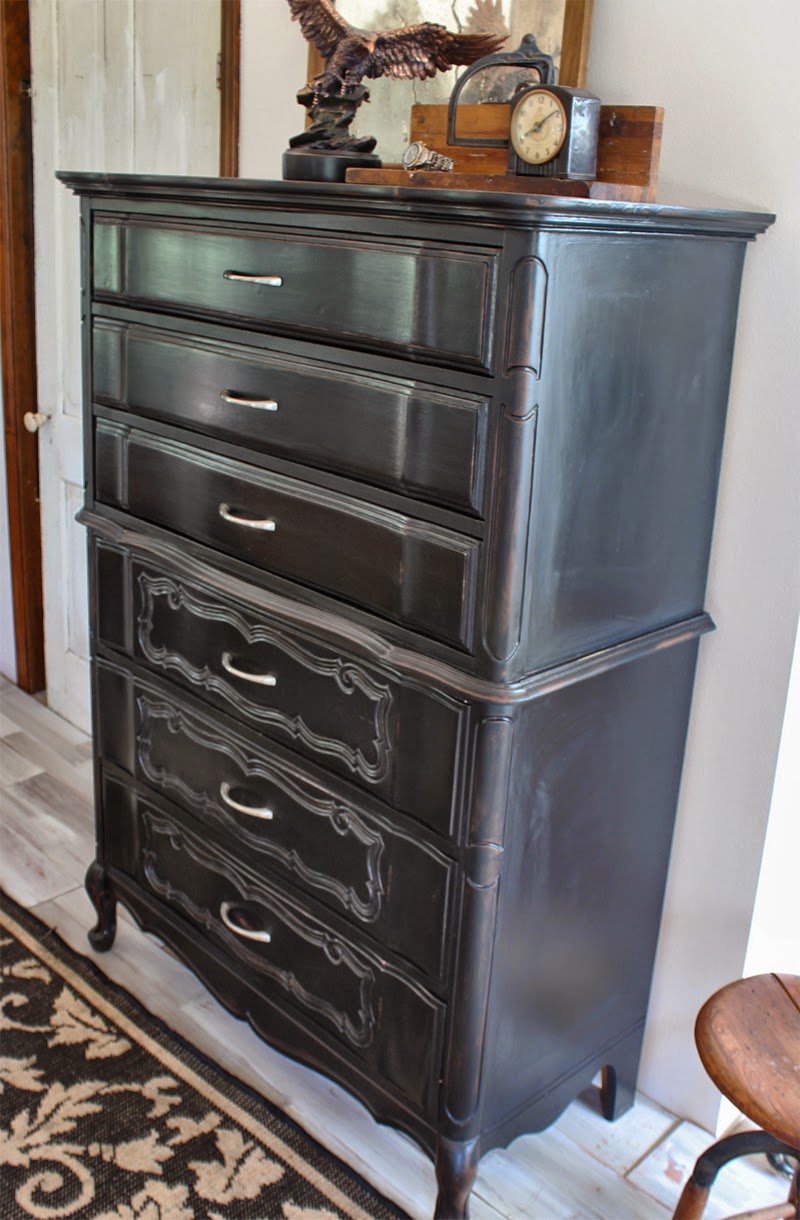 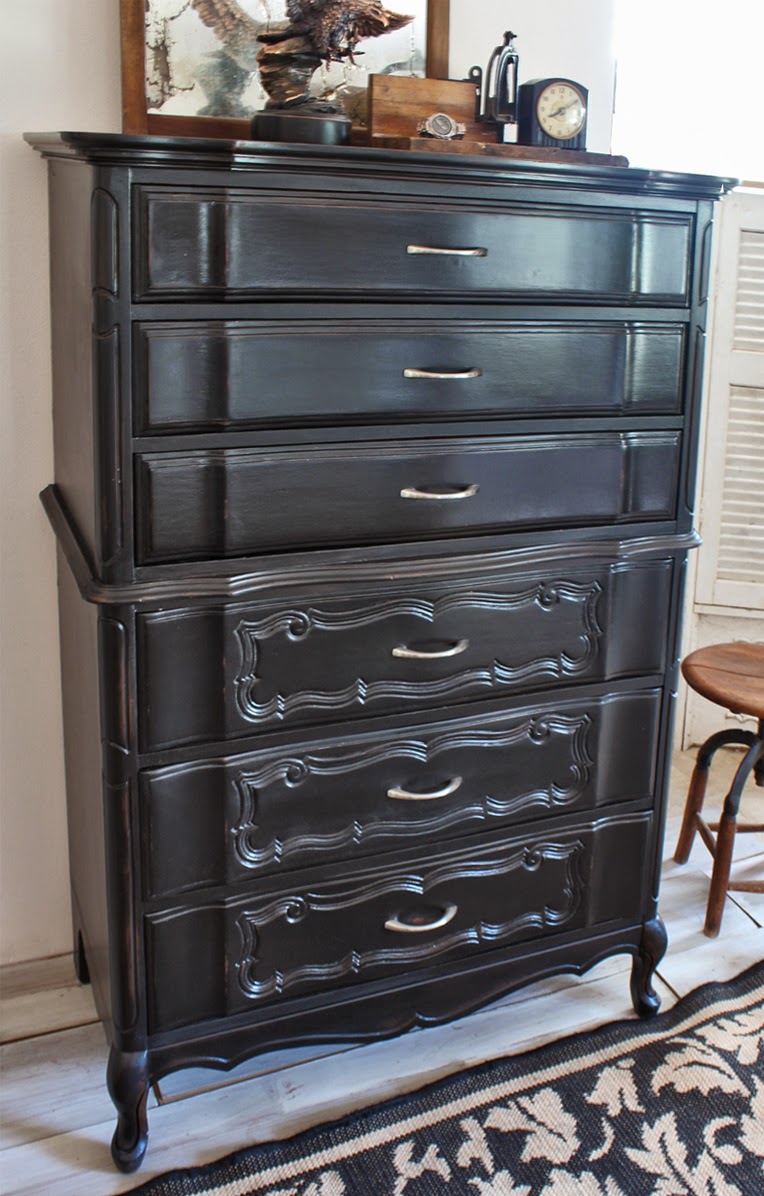 I have had no luck painting black dressers. Seriously, the finish always looks just awful and when I'm done weeping, I sand and go at it again. And again. And again. Maybe this was the turning point?
I hope so. 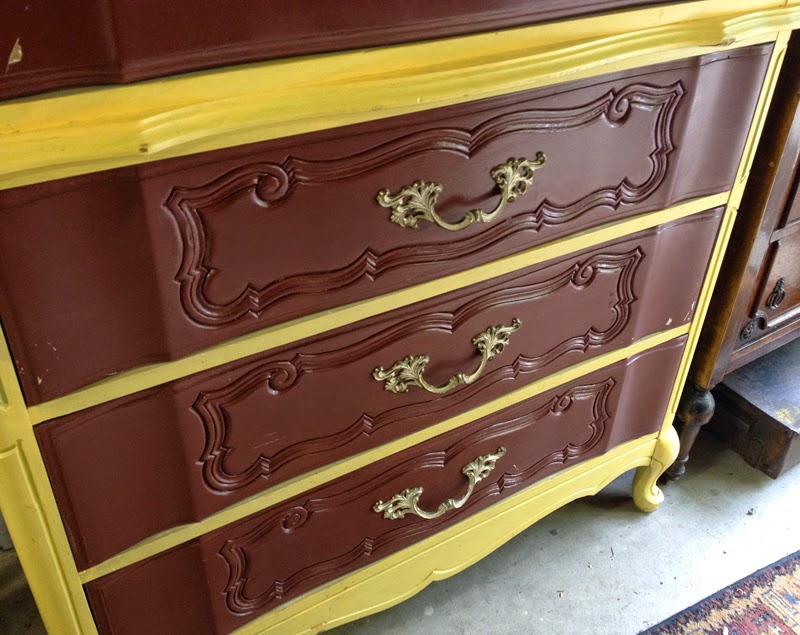 I saw potential in the lines and detail. That, and it's a STOUT thing. Big, solid and heavy, it truly is a man's dresser. You will not be moving this thing alone. Even with the drawers removed it won't budge without herculean effort. 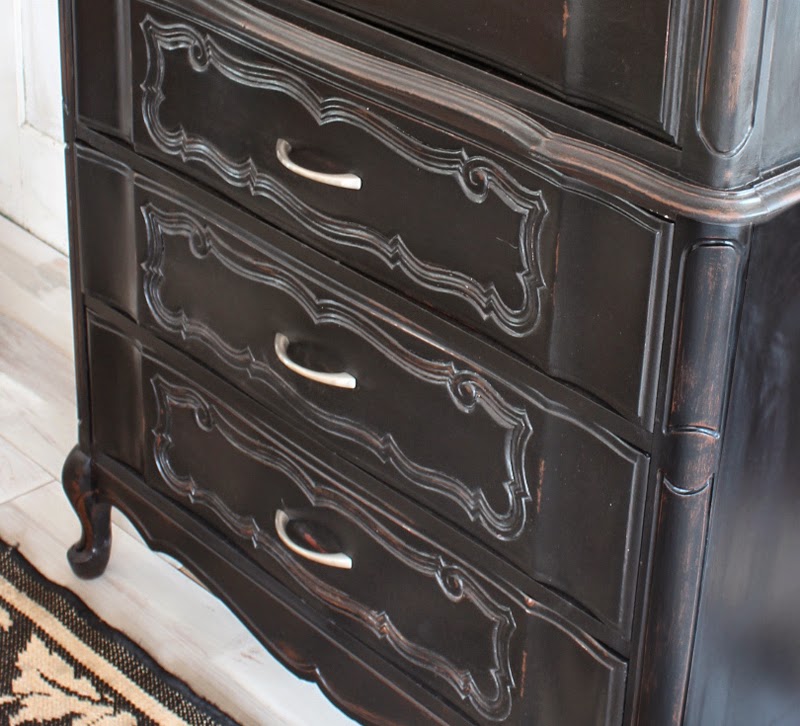 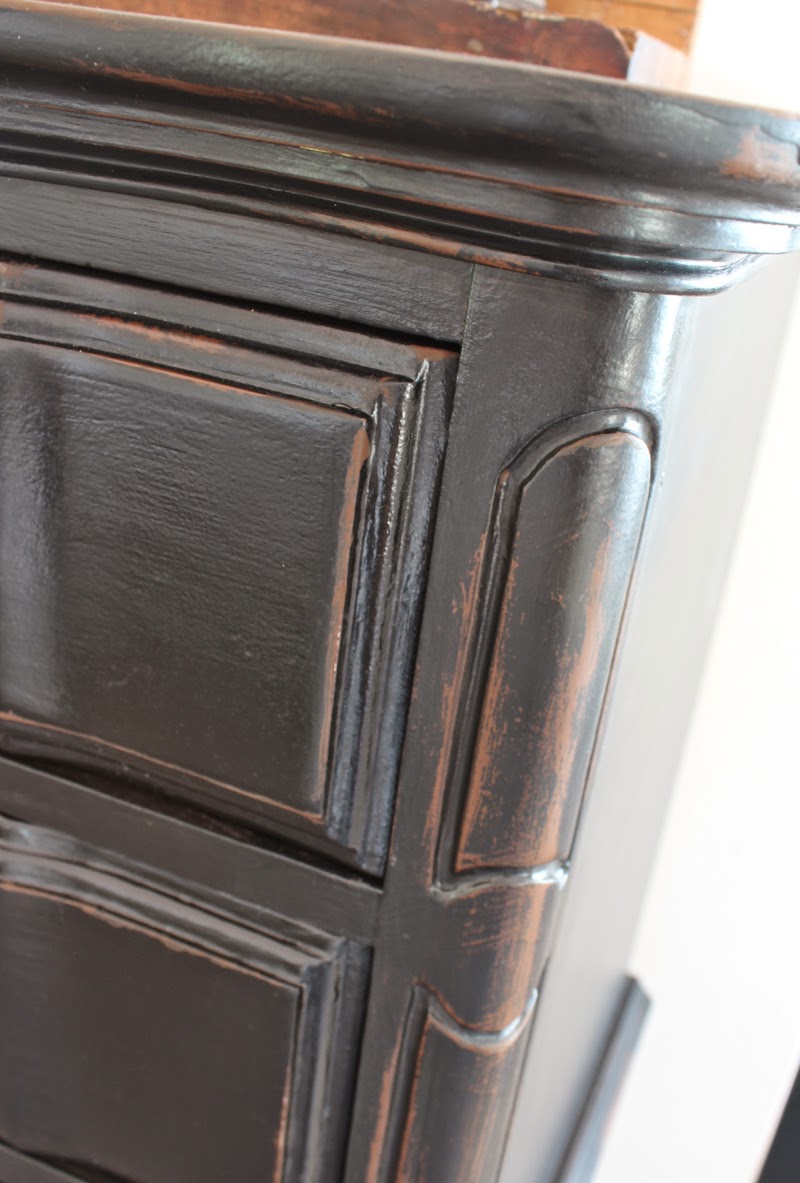 I did just a little distressing. 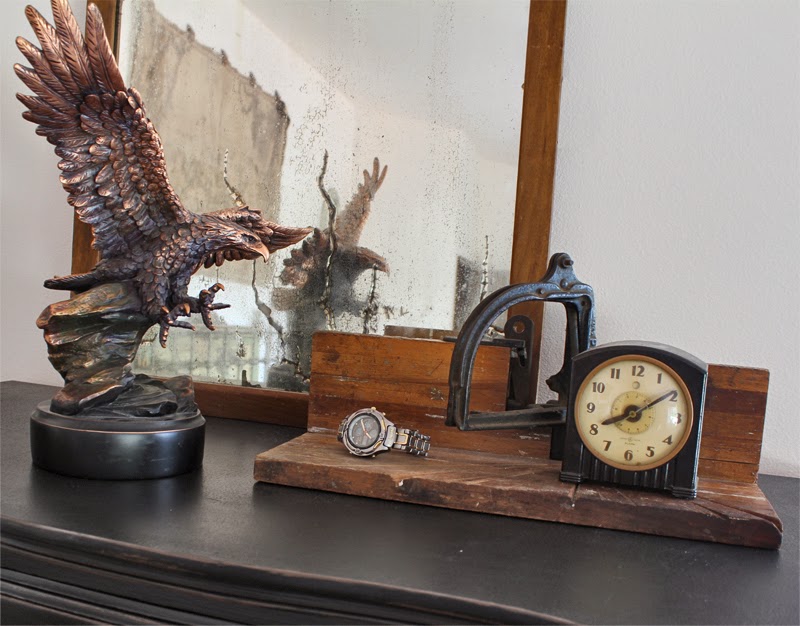 And a little restyling. 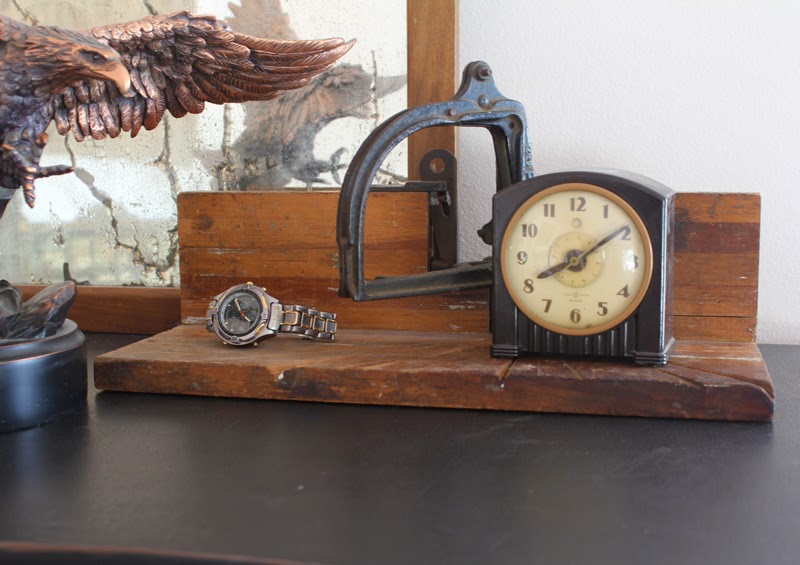 Instead of the usual valet tray I found this 1902 miter box. 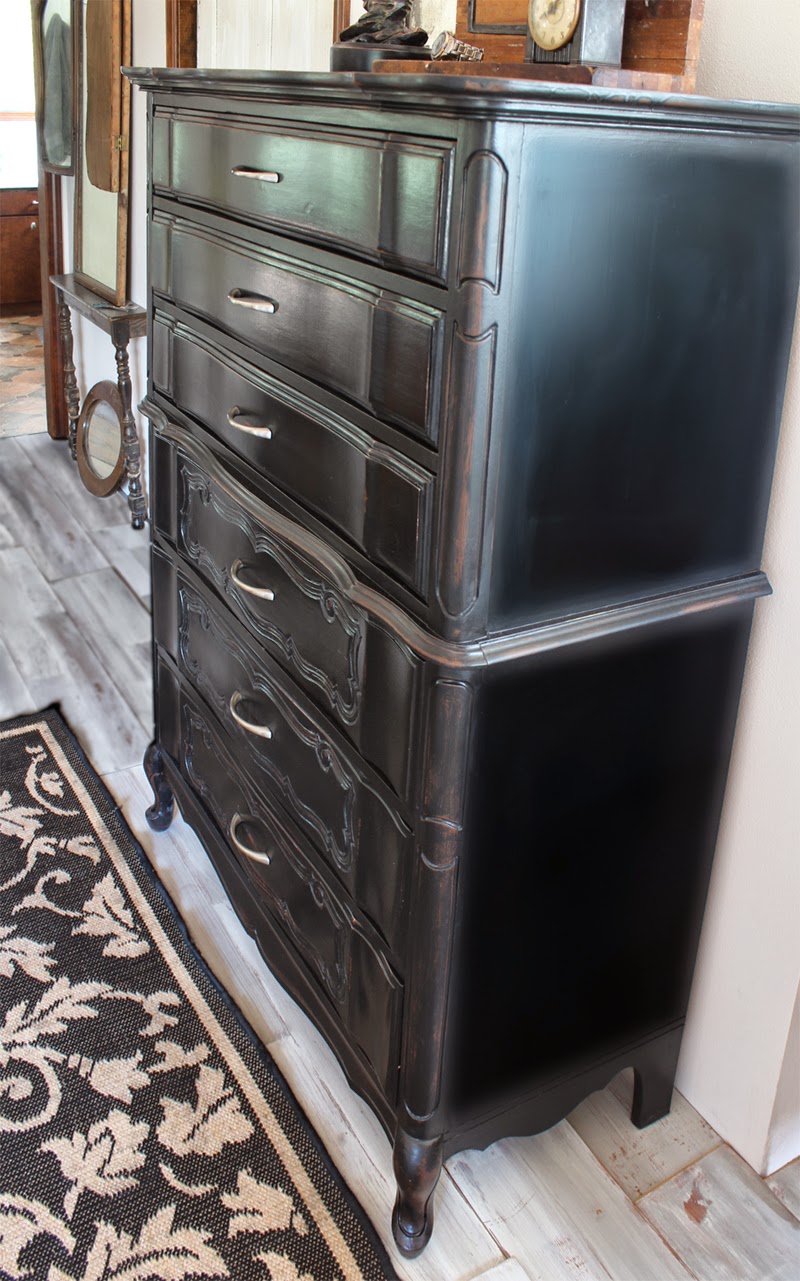 Mr. Bad Rabbit has been in Alaska all week so he has only seen pictures so far. :-)

Sharing with him and these fun sites:
beyond the picket fence
miss mustard seed
shabby nest
chic on a shoestring decorating
domestically-speaking
the dedicated house
what we accomplished Wednesdays 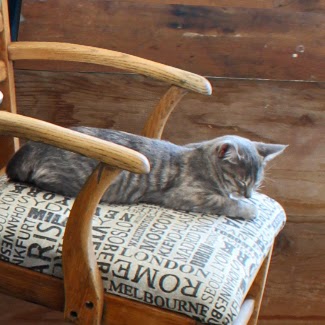 Inspector 11 asleep on the job.

Posted by Daena from Bad Rabbit Vintage at 12:13 PM